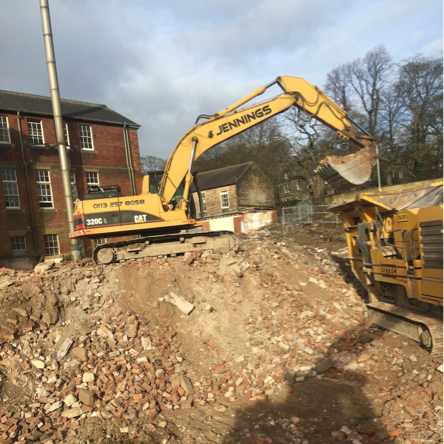 17 Jul The latest in demolition techniques

Posted at 11:57h in Demolition by jenningsdem 0 Comments

Demolition is a skilled industry and also a highly regulated one, in terms of health and safety, and the Building Act 1984. Therefore, the techniques used to demolish buildings fall in line with best practice.

It isn’t just a force of habit that sees demolition techniques repeated either: there are only so many effective ways to bring a building down safely.

The right technique depends on the building and site location. Pre-planned, controlled demolitions are the norm, with the techniques used focusing on an efficient demolition to reduce the need for additional work.

Here’s what you need to know about the latest demolition techniques:

Despite the use of explosives, implosion is a clean technique. The debris created by the buildings in freefall is calculated beforehand, so a clean-up operation can commence soon after the implosion has been performed.

Implosion is not always the best technique. Small buildings, domestic properties and buildings situated very close to the public may need to be brought down with a slower, more controlled process using machines.

The use of wrecking balls is still commonplace in demolition, especially for taller structures with a large debris zone. Demolition excavators are a favourite in the industry, as are straight tooth booms and wheel loaders.

Demolition by hand, also known as de-building, is a much slower process. This involves skilled workers deconstructing a building using their hands, with the assistance of hand and power tools only to aid in the work.

Which demolition technique is best?

This, of course, depends on the application.

For bringing down large structures, implosion is the best technique.

For bringing down smaller structures, machine demolition is the best technique.

For bringing down a building to recover materials, de-building is the best technique.

The truth is, most demolition projects – with the exception of high-rises, skyscrapers and tall structures – are done by machine. This is an efficient way to get the job done.

If any precious materials need saving, a project can have a combination of machine demolition and de-building. For example, an old church might have historic carved stone at basement level. This can be removed by hand, prior to the machines rolling in.

Implosion is the most interesting type of demolition to the public, because explosives are often only seen in films. But in reality, the application of explosives (and implosion) is lesser than both machine and hand demolition.

Have a demolition project of your own?

We’re demolition experts with headquarters in Leeds and Hull. For professional demolition services, call us today on 0113 255 8919.