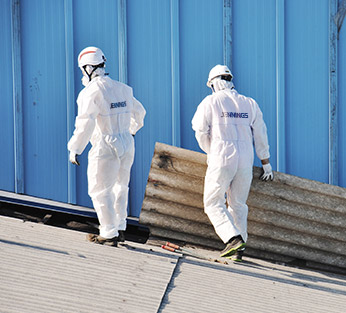 Posted at 12:25h in Asbestos Removal by jenningsdem 0 Comments

Asbestos is now known to a be a highly dangerous substance which can cause serious and irreparable damage to the lungs. However, these health hazards were only discovered in relatively recent years. Although the use of asbestos is now prohibited in construction, there are still plenty of older buildings which contain asbestos and can therefore present a health risk.

Here are the types of buildings which are most susceptible to asbestos, and where in these buildings you are likely to find it.

Buildings constructed in the 20th century

Asbestos began to be used in construction around 1890, when its fireproof properties were discovered. This led to it being used widely as a roofing material. Following this, throughout the early 20th century, asbestos became a popular solution for building insulation, and was also used as a cement bonding agent. Gradually asbestos was used in a huge variety of ways within both commercial and residential buildings, as it is hardwearing, durable and able to withstand extreme weather conditions and temperatures.

Due to increasing evidence about the health risks of asbestos, its use in new construction projects was banned completely in the UK in 1999, when the Asbestos Prohibition Regulations came into force. However, many existing buildings constructed before that date still contain asbestos which has not yet been removed, and may not even be known about. This means if you live or work in a building which was constructed or refurbished before 1999, you could be at risk of exposure to asbestos.

Which buildings are most at risk from asbestos?

The risk is greatest in buildings which were constructed between 1950 and 1980, as asbestos use was at its most common and widespread during these decades.

However, any building constructed or refurbished during the 20th century can be affected, whether it is a domestic dwelling, a commercial building or an industrial facility. Public buildings such as schools, libraries and leisure centres can also contain asbestos. It was so widely used in the construction trade at this time that there is no type of building which can categorically be declared asbestos-free, unless it has been checked and refurbished since 1999.

Which areas of buildings are most likely to contain asbestos?

Asbestos had so many uses in construction that it can be found in any number of areas within a building. However, some areas are more likely to contain asbestos than others. The areas where it was most commonly used include:

Asbestos cement was a popular roofing material, due to its durability and fireproofing properties. The use of asbestos did not just extend to the roof exterior; it was also used for gutters and piping. Asbestos pipework can be particularly difficult to identify, as it is often painted.

Inside the roof, sprayed asbestos coatings were regularly used as an additional fireproofing protection, and loft spaces were often insulated with loose fill asbestos, which can be particularly dangerous if disturbed.

Loose fill asbestos was often used to insulate the space between cavity walls, and asbestos cement was a popular choice for wall cladding on the exterior of buildings.

In addition, partition walls inside residential and commercial buildings were often made from Asbestos Insulating Board (AIB). This was also used to make fireproofing panels for interior doors, and for lining lift shafts in large commercial buildings and apartment blocks.

Asbestos used to be a popular material for floor tiles, especially in buildings with concrete floors. These days, many tiled floors are covered with carpets, so it is possible that there may still be asbestos floor tiles in your building.

However, even if your home or workplace has floorboards, this does not mean it is asbestos-free. Loose fill asbestos and sprayed asbestos coatings were often used in the space underneath floorboards to provide extra insulation.

Many boilers were insulated with asbestos, and it was a popular construction material for water tanks. Additionally, asbestos cement was often used to make flues for boiler systems and air conditioning.

It is even possible that your bath panels, cistern or toilet seat could be made from asbestos composite if they have not been changed in recent years.

If you are concerned about asbestos in your home or workplace, and would like more information and advice from an expert team, please contact us, and we will be happy to provide you with the help and support you need.